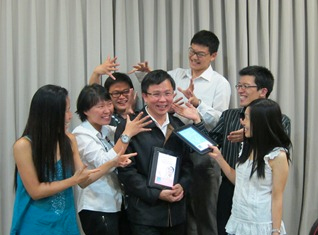 Step into the reception area of MHC Asia’s offices at One Commonwealth, and peals of laughter are immediately audible coming from the adjacent conference room. The staff who emerge shortly afterward are grinning from ear to ear, The occasion? Not an office party; not even the announcement of a company-wide bonus. It is an ordinary meeting in a not-so-ordinary company.

The orchestrator of the laughter is the last person to appear – Low Lee Yong, MHC’s CEO and founder. At first glance the poker-faced doctor does not seem a likely source of meeting-time mirth until with a flourish he offers his “business card’- a perfectly blank white card that turns out, on changing hands, to really be his business card after all. The sleight-of-hand is followed by a rapid string of witty anecdotes and quips, all of which leave listening staff members giggling without once moving their CEO to crack a smile.

Dr Low’s explanation for the jokes and magic tricks is simple: ‘Work has to be fun. My people work here eight hours a day. I want them to enjoy what they do, to look forward to coming into the office in the morning.”

MHC’s conference room is further physical proof of this philosophy. The meeting table in the center of the room lifts up to reveal a table tennis board; the room itself can be accessed separately from the main office so that staff can use it for their own recreation or personal projects even outside office hours. And, in tribute to the company’s run in-house corporate social responsibility project, the longest wall of the conference room is adorned with a montage of photographs from Goducate, the non-profit organization that MHC has adopted as its beneficiary since 2009.

Outside in the main offices, the only visible physical evidence of the company’s real business is a large number of iPads loaded with various software, educational and publicity materials. Not that this is unusual. MHC – short for managed health care is primarily a technology driven company using a proprietary Web based platform to link up a network of over 740 general practitioners, specialists and dental clinics around the region. This platform tracks and processes outpatient visits for corporate clients, automatically matching up employees’ medical entitlements with their actual claims, and thus eliminating the need for extensive documentation and cross-checking on the company’s end.

This success story, however, is the end result of enough financial roller coasting, heartache and drama to fuel a television soap opera. And all it started out with was a desire to make things more equitable for small players in the medical field.

Behind the witticisms, the play time and ubiquitous iPads, MHC is at its heart, a company founded to help level the playing field. As a solo general practitioner (GP) in the 1992, Dr Low found himself facing massive market inequalities, beginning with an enormous amount of debt. After buying out the final year of his government bond with a $30,000 credit card overdraft, he had to take out a $130,000 bank loan to start his clinic, and then he was confronted with a combination of skyrocketing rentals and cut throat competition from polyclinics and larger groups.

“I knew of many other solo GPs like myself who were struggling, and I wanted to do something for them,” says Dr Low. “While working in my clinic in 1994, I decided to do something to level the playing field for the solo GPs. I convinced a few doctors and classmates to join me to form a network of 20 clinics.”

His initial objective was to help solo GPs overcome their biggest cost issue – suppliers were charging them higher prices for drugs and other medical supplies, as compared to the prices offered to large groups. As a network, they were able to offset that by getting bulk discounts.

Second to economies of scale came enrolling corporate clients; right from the start, Dr Low realized that companies preferred to deal with groups or networks rather than individual clinics. ‘We explored fax back, paging and even wide-area dial-up network technology in the early days before the Internet came into the picture. “he says. We wanted a network of clinics that provided cashless outpatient visits for corporate clients, so that employees no longer need to bring their receipts to seek reimbursements from their insurers or employers.”

In 2000, during the dot.com craze, Dr Low raised $2.4 million and started a dot.com company of his own; to build a more comprehensive web based solution for MHC. The resulting platform made MHC the first company in South East Asia to link up a network of 150 GP clinics for more efficient processing of medical claims. However, the subsequent crash of the dot.com market, combined with his initial unfamiliarity with business matters, almost went on to sink the fledging business.

“I was without any business skill and had zero knowledge in technology,” he recounts ruefully. “I did not even know how to read a balance sheet and financial statement!”

The business lost so much money at the beginning that Dr Low was forced to convert his debtors –almost entirely other doctors-into equity partners to keep it afloat. “I ended up having to manage a company with several directors and 50 shareholders,” he says. “It was like running a public listed company.”

Finally, he effected a management buyout in 2004 and with full control back in his hands, proceeded to trim MHC down to the essentials. The turnaround was more than dramatic-within three years, he was able to pay off more than $2 million of debts and focus on his vision of what he wanted the company to be.

“My chairman and friends who knew what I went through told me that I have attended a very tough business school called MHC,” says Dr Low, who is now planning to write a book on his experience with entrepreneurship.

MHC and its founder are much lauded in their niche. In 2010, Dr Low won two Entrepreneur of the Year awards-the ASME-Rotary award and the Starhub-sponsored Info-Communication and Technology sub-category award. The same year, MHC was voted one of the Singapore human resource community’s HR vendors of the year. It seems a perfect candidate for financial growth, and perhaps an initial public offering.

But Dr Low has other ideas. Just as he started the business to establish a better situation for small players, his focus is now equally on giving back to society. “I have been poor and I know what it is like to have a rich Primary 3 classmate visit me in my kampong driven by his chauffeur,” he says frankly. “I had to run to hide because I was wearing slippers and had a hole in my shorts.”

Instead of letting MHC remain a vehicle for profit alone, he concentrates a generous amount of effort on its adopted non-profit organization, Goducate. Goducate, which means “Go and Educate”, aims to better the lives of the underprivileged in South-East Asia through making education accessible to them and establishing livelihood projects in impoverished regions. MHC has already donated six vehicles to the aid of needy children and farmers in Cambodia, Sabah and the Philippines, and is currently supporting an orphanage in Cambodia and nine kampong schools providing free education to over 2000 children. The amount committed by the company is no less than 10 per cent of its annual profits.

“You don’t need to be Bill Gates to donate billions to charity,” says Dr Low. “But I can also do this because I don’t have to justify the commitment of money, time and company resources to a larger group of shareholders.”

The same goes, he says for providing his 40 odd staff, some of whom have been with him for 16 years, with generous work-life benefits. “If you want a company to grow, you have to be dynamic,” he says. And by dynamic, he means being responsive to not only the business environment, but to the needs of its stakeholders both near and far. “To me, the bottom line will come if the business is sound and the staff is happy. Take care of that, and the bottom line will adjust itself.”